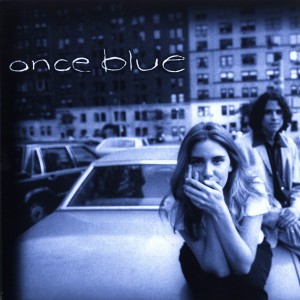 On their remarkable debut album for EMI, Rebecca Martin and Jesse Harris of Once Blue have created a blissful combination of smoke and savvy. Like other artists who dip into a cross-genre ragout – from Steely Dan to Jane Siberry – ONCE BLUE weaves an unexpected tapestry of moods that is as dependent on simplicity as it is on innovation.

Working with an impressive band that include Ben Street on upright bass, Kurt Rosenwinkel on electric guitar  and Kenny Wollesen on drums, singer/songwriters Harris and Martin recognize – smartly – that gentle music can possess a tough backbone; “Where To Now” builds strongly into a faraway cry of desire while  the rhumba twirl of “Wait”  brazenly seduces.  Martin’s strong but vulnerable vocals stir up striking variations of passion and irony.

“I’d say what we do is pretty eclectic,” says Martin in her bell-like voice. “Jesse and I have listened to so much music. It would be difficult to pinpoint on influence or sum up what it is that we do.” Looking over the hodgepodge of CD’s crowding their stereo, Harris admits to an affection for disparate musical styles. “Bill Frisell, Bob Dylan, Duke Ellington…” lists Harris.

Though their refined musical chemistry is indisputable, Martin and Harris come from very different backgrounds. Martin grew up in Maine as the daughter of a doctor and nurse.  “When I was eight years old, my parents took me to New York City to see Andrea McArdle play ‘Annie’ on Broadway. I bought the record and became  completely obsessed with it.” Martin even went on to play “Annie” in several productions in Maine. “That was my first true singing experience.” Later, as a determined youngster, Martin hooked up with a local recording studio not far from home.  There she sang background vocals on most sessions that came through the studio, eventually recording her own projects.

Her musical tastes became more so sophisticated. “My mother introduced  me to the songs of George Gershwin and Cole Porter.” Martin says. “Later came Joni Mitchell’s records and other singer/songwriters. My first jazz record was Sarah Vaughan’s The Divine One which is still my favorite record today.”

Harris is a born and bred New Yorker, the son of an actress and a lawyer. “When I was ten I took up the piano for about four years but wasn’t much for practicing.” Harris admits. “I was obsessed with buying records.” Determined to find an instrument that he believed wouldn’t require any formal practice, Harris started playing the harmonica. “I’d accompany guitar players and singers and eventually started to play the guitar,” say’s Harris. “I finally quite the harmonica when I heard John Popper of Blues Traveler play.” With assiduous practice, Harris focused energy on the guitar. After playing and writing songs for a variety of bands while attending Cornell University, he returned to Manhattan determined to pursue his ambition as a singer/songwriter.

At the same time, Martin moved to New York, hooked up with a guitarist and began playing gigs at small clubs throughout the city, some admittedly pretty divey. “New York was challenging, but I never lost focus on the music.” Harris had his own challenges. “Singing was always my biggest hurdle as an artist though I was fronting bands and performing solo in the city,” he says. “I always sang my own material until I met Rebecca, and she opened up a whole realm of possibilities.”

“Jesse and I met through a mutual friend who had been trying for months to introduce us. She told me I would love his music,” Martin recalls. Jesse finally came to see Rebecca perform at the Bitter End in November of ’92.  The couple formed a musical partnership about six months later soon adding Street, Rosenwinkel and Jim Black (later, Kenny Wollesen would join the group and record their debut album).  By the fall of ’94, they had already played high profile gigs at Manhattan clubs such as Cafe Sin-e, CBGB’s Gallery, The Bottom Line and Fez. They attracted a loyal, steadfast following of fans who thrived on the band’s incomparable live performance. In fact, it was at CBGB’s Gallery gig that ONCE BLUE was signed – in true Cinderella fashion – by EMI president and CEO Davitt Sigerson who’d wandered in after seeing another band next door.  He offered the duo a record deal on the basis of that night’s performance.

ONCE BLUE’s debut album is produced by Steve Addabbo, who has worked with Suzanne Vega and Shawn Colvin, and engineered by Joe Ferla. Keeping true to Martin and Harris’ desire to keep the band’s sound pure and honest, the album is primarily acoustic. “The album was recorded with our live performance in mind,” says Harris. “There are minimal overdubs on this record and most of Rebecca’s vocals were done in one take. What’s nice about doing it that way – and it’s the same way so many old records remain timeless – is that you leave in the imperfections and the raw excitement of a band making music in the moment. Perfectionism in the studio can sometimes take the life out of a final recording.”

“Steve had become really familiar with our music because he came to so many of our performances dating back a year before we made the record.” adds Rebecca. “We never had to explain ourselves in the studio. There was a real connection.” In addition, both Martin and Harris have strong ideas about maintaining the band’s organic and spontaneous dynamic throughout the recording sessions. “That’s where we wanted to begin in the studio,” says Martin. “We never sought perfection, just the power of collaboration.”

An accomplished, stunningly handsome debut, ONCE BLUE proves that musical alchemy can occur with the perfect partnership. Martin’s bare, emotional vocals and her own savvy in building flawless melodies blend seamlessly with Harris’ lyrical poetry and instrumental sensibilities.  They’ve created what might be the quintessential New York, autumn afternoon album. ONCE BLUE is an extremely personal discovery of sound and spirit.