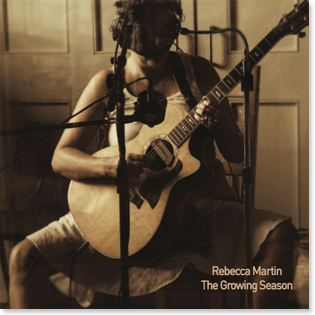 I met Rebecca Martin about ten years ago, sitting upstairs at a club with guitarist John Scofield and bass player Larry Grenadier. She and Larry were just married, or about to be…they couldn’t stop looking at each other. No one mentioned that Rebecca was a singer. They didn’t have to. It wasn’t just the soft lilt of her voice, but the way she held onto words for an extra beat and then let them tumble out in a rush of soft exclamations. Even when she was in the background, it was hard not to see her as being centerstage.

I found out more later on. She had come down to New York from rural Maine and had a band called Once Blue with singer guitarist Jesse Harris. Their album on EMI still sounds playful and timeless, as if Blossom Dearie had recorded with Steely Dan. But the confines of a band, even a casual one, was out of character for Rebecca, just as it would be out of character for Georgia O’Keefe, Amelia Earheart or Joni Mitchell. She moved out of the band the way you’d move out of an apartment that was too small or too noisy and moved into a new space.

Rebecca’s first solo album Thoroughfare was filled with gorgeous melodies and songs that were mysterious and chilling, evocative of lost childhoods, lost loves, lost moments. Her voice had a new strength coupled with a new vulnerability, a letting go that takes the songs beyond language into a place of half-remembered dreams coupled with the mineral fact of being alive in this life right now.

A series of projects followed: an album of standards, Middlehope, which the NY Times named one of the ten best jazz albums of 2002; a lovely album of her own songs, People Behave Like Ballads; a collaboration with legendary drummer Paul Motian, that led to a fine CD, On Broadway Vol. 4, or The Paradox Of Continuity.

At the same time, Rebecca began hosting songwriter evenings at her home, encouraging writers (solitary and cranky, at the best of times) to get together in a safe and nurturing environment to try out new material. Her living room was filled with people like Larry John McNally, Timothy Hill and Frank Tedesso, and the air was filled with songs that were still taking shape. Rebecca’s songs usually stole the show — they had a quiet grace that made them stand out, not to mention a strength and power that belied their casual presentation. At first a melody would seem amorphous and random, until you’d realize that Rebecca was following an impulse, the way you’d follow a fish, twisting and turning through the waters, until she’d arrive at the very heart of a song.

And now Rebecca has brought all of her strengths together for The Growing Season, an album I’ll be listening to for a long time. It’s an album of songs about motherhood, about living in the world and living in your body. There is an effortlessness about it, buoyed by the lighter-than-air rhythms of drummer Brian Blade, the supple rightness of Larry Grenadier’s beautiful, emphatic bass, the otherworldly chordings of guitarist Kurt Rosenwinkel, all anchored by Rebecca’s elegant songs, lovely, picked guitar and smokey, generous voice. It’s a voice that seems to leave nothing out: sex and death and breakfast and wind in the trees and tax forms and laughter and night. All at once.