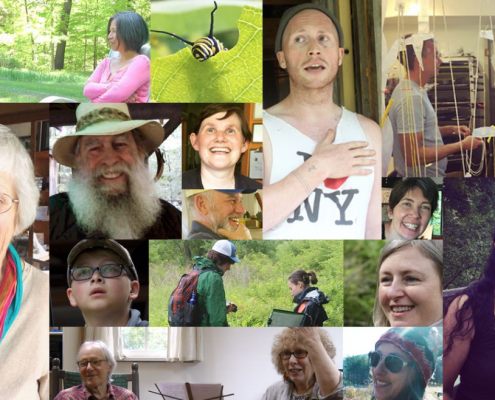 “Catskill Waters, a watershed-related community art project, is holding a fundraiser on October 14 that artist Keiko Sono of Bearsville describes as a hybrid of “a multi-media art project, culinary bliss, and a social and economic experiment.” Expect artworks made of ice, gourmet dishes prepared the former owner of Chanterelle in Manhattan, and unusual in a fundraiser income for participating artists….A four-course dinner will be prepared by David Waltuck, owner of the legendary Chanterelle, which operated in Manhattan from 1979 to 2009. Although it was one of the city’s most expensive restaurants, Chanterelle was famous for the warm welcome Waltuck and his wife gave to guests. The New Yorker journalist Adam Gopnik described his meal there as “a three-hour engineered transcendence of the mundane.” Every six months, a new menu cover would be designed by folks including John Cage, Edward Albee and Francesco Clemente.  Several original menus from the Chanterelle collection will be exhibited. Sono has asked seven local artists to design menu covers, which will be on display and on sale.”

The banquet will honor Rebecca Martin, a founder of KingstonCitizens.org. Through the work of Martin and other activists, the proposal to build a bottling plant using Cooper Lake water was withdrawn.”