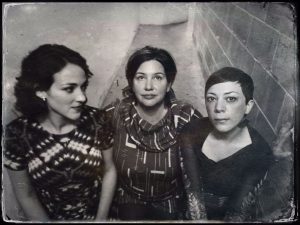 Individually, Rebecca Martin, Gretchen Parlato and Becca Stevens are three of New York’s most acclaimed and respected vocalist/songwriters.  Together, as Tillery, they’re a potent collective force that’s more than the sum of its already formidable parts.

The threesome’s seamless creative chemistry and organic personal rapport makes for a powerful collaboration that’s been wowing live audiences since the trio first joined forces in 2010.  United equally by an abiding friendship and a mutual admiration for one another’s talents, Tillery finds these three unmistakable individuals converging into a distinctive and deeply compelling whole.

Tillery’s members are already renowned for their individual musical achievements.  Maine-born Rebecca Martin is a widely respected two-decade veteran whose vocal and songwriting talents have allowed her to effortlessly straddle the worlds of jazz and pop.  She’s released half a dozen acclaimed albums, on which she’s worked with many of jazz’s most esteemed players, including Brian Blade, Paul Motian, Kurt Rosenwinkel and Martin’s husband, bassist Larry Grenadier.

Native Californian Gretchen Parlato is one of the jazz world’s most celebrated rising vocalists.  She first rose to prominence when she finished in first place in the 2004 Thelonious Monk International Jazz Vocals Competition.  Since then, she’s released three solo albums, as well as lending her voice to more than 50 albums, including high-profile releases by Kenny Barron, Terence Blanchard, Lionel Loueke and Esperanza Spalding.

Although a relative newcomer, North Carolina-bred Becca Stevens has quickly emerged as one of the jazz scene’s brightest young lights.  In addition to releasing two albums of her original compositions with the Becca Stevens Band, she has sung with Travis Sullivan’s Bjorkestra, and performed and/or recorded with such esteemed musicians as Taylor Eigsti, Eric Harland and Brad Mehldau.

The seeds for Tillery were planted in late 2010, when the three artists met and became fervent admirers of each other’s work.  Although all three hail from diverse backgrounds and belong to different age groups, they quickly recognized each other as kindred spirits, striking up a personal bond as well as a budding creative collaboration.

The circumstances that spawned the partnership were initially set in motion when a mutual friend of all three artists brought Gretchen Parlato to a Rebecca Martin performance at Manhattan’s Jazz Standard.  “Her voice and songs brought me to tears,” Parlato confides.  “She has such a warm, loving energy, and I immediately felt like she was someone I wanted to be around and share my time and music with.”

The same friend had also been singing the praises of Becca Stevens to Parlato, inspiring her to attend one of Stevens’ shows at the Cornelia Street Cafe.  “I was in complete awe of her,” Gretchen notes.  “She has the kind of intensity that, from the very first sound out of her mouth, you know that something deep is happening.  We got to know each other better when we sang together in Taylor Eigsti’s band Free Agency.  We realized that we understood and processed music in the same way, and that we laughed and joked about the same things.  And knowing both Rebecca and Becca, I felt like their energies would relate and bond.”

Stevens, meanwhile, had long been aware of both Martin and Parlato.  “They were the women in jazz who I could admire when I was coming up,” she says.  “I felt totally humbled by the brilliance of Gretchen’s craft, so when she came to my gig, I was really flattered.  I had a similar feeling when, after being aware of Rebecca for so many years, she sent me an email out of the blue introducing herself.  I finally met her at Cornelia when I went to one of her shows.  Gretchen was there too, and the three of us took a picture together after.  I laugh when I look at that picture now, because even then, we had the same goofy, spontaneous energy that we have now.”

When they subsequently reunited for an all-girl getaway weekend at Martin’s house in upstate Kingston, NY in late 2010, it seemed inevitable that they would end up making music together.  “At some point, I picked up my guitar and said ‘Let’s sing something,’ and that was it,” Martin recalls.  “There wasn’t any thought put into it.  It just happened, and it just made sense.”

“Rebecca taught us one of her songs, and then another,” Stevens remembers.  “The three of our voices and the warm receptive energy in the room created this sound that was like… love butter.  You just want to spread it all over everything.”

A week later, Gretchen and Becca joined Rebecca on stage to sing a few songs at her record-release party, and it quickly became apparent that the informal arrangement should become a permanent one.  The new trio made its official debut at the Cornelia Street Cafe in January 2011, as part of a series of shows that Stevens was booking at the venue.  After initially operating under the tongue-in-cheek handle Girls Gone Mild, Martin, Parlato and Stevens eventually adopted Tillery (also the title of a Stevens composition) as their permanent monicker.

Their work together emphasizes the wide common ground, both musical and personal, that Martin, Parlato and Stevens share.  That collective spirit is strong in Tillery’s live shows, which combine songs written specifically for the group, material drawn from the members’ individual repertoires and a surprise-filled assortment of cover tunes.

“I’ve had so many moments on stage with Becca and GP where I’ve felt transported,” Martin states.  “I think that we allow our own unique and authentic selves to come through in the music.  Both Becca and GP have gratitude and humility in their lives, which allows us all to enjoy and share all aspects of ourselves when we come together.”

“We’ve managed, without trying, to maintain the same energy that we felt together that first night that we sang together at Rebecca’s house,” Stevens observes.  “I think there’s something really refreshing about a performance where the performers love  and admire each other so completely.”

“We all just take this project as it comes,” Parlato concludes.  “It’s all very natural and nothing is forced, and because of this, we always approach it with open arms, open hearts.  There’s no pressure to do or create anything.  It just happens when it happens.  It’s always magical, and it always feels like it was meant to be.”