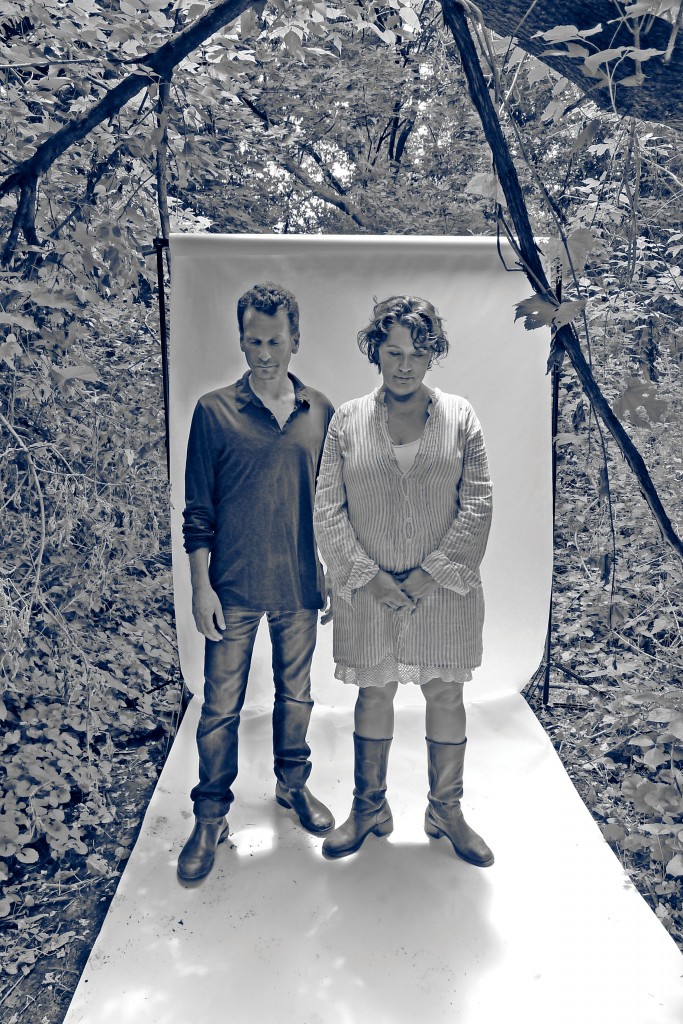 “Just beyond the hillside

Back where the curtain calls to us

That the whole world is waiting to find us.”

From the song “Beyond the Hillside” by Rebecca Martin

“This record has been a long time in the making,” Rebecca Martin says of her elegantly spare, eloquently direct new album Twain. “A lot of living and a lot of energy have gone into the creation of this group of songs. ”

Her sixth release under her own name and her third for the Sunnyside label, the warmly intimate set offers a uniquely expressive showcase for Martin’s artistry, with a dozen resonant new original compositions and one classic interpretation, all performed in understated acoustic arrangements based around the artist’s indelible voice and supple guitar work and the subtly inventive support of her husband and longtime collaborator, noted jazz bassist Larry Grenadier.

“My records over the years,” Martin observes, “have become more quiet and introspective, which probably has to do with the need and appreciation for personal space.  The recordings I make are a reflection of wherever I am at that time, so it makes sense that my reaction to a world that feels speedy, harsh and loud is to offer music that provokes slowness, emotion and quiet.”

Martin’s drive towards a more spacious sound yields deeply compelling results on Twain, whose title refers to an old English definition of the word as a synonym for the number two.  On such melodically arresting, emotionally vivid new tunes as “To Up and Go,” “Don’t Mean A Thing at All,” “Beyond the Hillside” and “God Is In the Details,” Martin sings with a quietly commanding intensity that lends immediacy to her lyrical insights.  Meanwhile, her distinctive reading of the Duke Ellington classic “Sophisticated Lady” once again demonstrates the uncanny interpretive skills that she previously revealed on a pair of much-celebrated standards albums.

Martin was a young girl when she left her rural hometown of Rumford Point, Maine to pursue her musical ambitions in New York, where she met fellow singer-songwriter Jesse Harris.  The duo formed the influential group Once Blue, which gained a devoted local following and won a record deal with EMI.  Once Blue’s 1995 debut release won international acclaim, but a second album got caught up in record-company politics and went unheard by the public until 2003.

Martin launched her solo career with 1998’s self-written, self-produced Thoroughfare, whose introspective songcraft established Martin as a significant individual force.  She expanded her reputation as a singer’s singer—and as a performer whose work defies easy pigeonholing—with her self-produced 2002 standards collection Middlehope, which The New York Times named one of the year’s ten best jazz albums.  Martin’s next album of originals, 2004’s People Behave Like Ballads, was a genre-bending collection that once again demonstrated the breadth of the artist’s interests and abilities.

In 2005, Martin teamed with seminal jazz drummer/composer Paul Motian as featured vocalist on Motian’s On Broadway Volume 4 or the Paradox of Continuity, becoming the first singer to accompany Motian on one of his recordings.  The experience, Martin says, was a pivotal one that’s informed her attitude towards her own recordings in the years since.

“The experience of making music with Paul changed my life, and set me on a completely new path in how I approached my own music,” she explains.  “It was the first time I’d recorded without a chordal instrument, and that was a revelation for me.  It was also liberating to be working with one of my idols in an atmosphere that was completely down to earth and blue-collar.  Everybody involved came in to do the job in a couple of takes, and we were always finished by dinnertime. It was a real collaboration and working unit, and it was eye-opening to be a part of something like that.”

After the Motian album’s release in 2006, Martin was asked to perform with him at Carnegie Hall as part of a tribute concert to the Village Vanguard’s Lorraine Gordon, and she and Motian subsequently performed music from the project during a two-week run at the Village Vanguard.

Martin began to put Motian’s less-is-more ethic to work after moving to the Sunnyside label with her 2008 release The Growing Season, produced by Kurt Rosenwinkel and featuring Larry Grenadier and Brian Blade on bass and drums, respectively.  The album won Martin some of the most enthusiastic press raves of her career, including a New York Times critic’s pick, which praised her “warm, unguarded voice, an instrument of modesty and forbearance,” adding, “She can make the same phrase seem philosophical and conversational, and about as natural as sighing…  She makes this album feel momentous, in the quietest possible way.”

The Growing Season‘s success led to an invitation to perform a week’s worth of headlining shows at New York’s Village Vanguard, making Martin the first singer-songwriter to play the legendary jazz club in more than 30 years.  She followed those career landmarks with 2010’s When I Was Long Ago, another collection of personalized standards, this one delivered in spare three-piece arrangements featuring Martin, Grenadier and saxophonist Bill McHenry.

Martin and Grenadier recorded most of Twain in a small bedroom in the apartment of longtime cohort and pianist Pete Rende, who produced, engineered and mixed the album.  “For the most part, what we did and how we felt on that day became the record,” Martin notes, adding, “Larry placed a great deal of care into making the songs work in a duo context.  There were a few that were a bit trickier to pull off that way, and for that reason, we added some drums in places and other textures to help move the album along.”

“In 2011, I lost my speaking voice completely for many months,” Martin confides.  “It has been a long recovery back to where I am now, though the way I sing today is much different than before.  It was a universal reset or something, and now it feels completely natural to simply use my voice to communicate the song, rather than making some tremendous effort to ‘sing’ it.  This had always been very intuitive and natural for me when singing standards, but in my own music I’d always been tentative in presenting the songs in that way until now.  I’d developed some bad habits over the past 20 years by denying myself the most direct pathway for my simple, authentic voice.  There are deep emotional reasons for that, and this group of songs provided me the vehicle to help move more of it out of my body.”

Martin has also put her organizational skills to work on behalf of her community in her adopted hometown of Kingston, New York, where she has been active in promoting government transparency and citizen civic involvement.  In 2009, Martin was Community Activist of the Year by the Ulster County YWCA and in 2010, began serving as Executive Director of the Kingston Land Trust, an urban land trust in the Hudson Valley.  She recently stepped down from her duties in order to prepare for the release of Twain and other musical endeavors.

“I continue to be an optimist, in life and in music, ” Martin concludes, “and I try to remain open to the opportunities that present themselves whatever they might be, and which have led me to all sorts of interesting places.  It’s kind of like fishing.  You throw in your line and wait to see what you’ll catch.  I still get off on the not knowing, and always eager to see what the next adventure will bring, challenges and all.”